Hulaki Rajmarga or Hulaki Highway (हुलाकी राजमार्ग) is a long time under construction highway of about 1,700 kms in terai plains which aims to connect eastern part of Nepal to the far western part. Most of time this highway will run very near to the Indo-Nepal border and somehow parallel to the present East-West highway which also runs through terai plains but about 20 miles north. Since the government keeps changing the route, the expected length of this highway is fluctuating between 1,663km to 1,792km. (li,li)

A similar highway named Madhya-Pahadi Lokmarga (mid-hill highway) is under construction which will also connect eastern Nepal to far western region but it runs further north through the hilly districts. 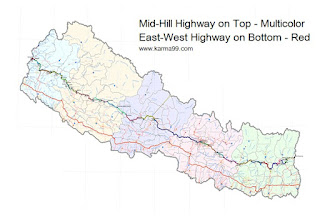 Literally, Hulaki means Postal in Nepali language. During the Rana regime (1846-1951) the Hulaki route was used to transport Mails by postman.  When the Mahendra Highway was planned in 1970s Hulaki route was one of the route proposed for the Highway. But the developers at that time decided to run the highway little bit north through the foothills of chure.

Many parts of the Hulaki highway is already existed in different names. These are the key points and districts on the way of Hulaki Highway.

Hulaki Road are the feeders that connect Hulaki Highway and Mahendra Highway. There are 19 hulaki feeders in terai districts.
Role of India

Indian PM Chandrashekhar had given assurance to construct Hulaki Rajmarg in 20 terai districts in 2047 BS but the paper agreement was finalized only after 14 years in 2061 BS. According to the the agreement 'consultants' and 'construction contractors' had to be Indian national. Since then only 64.84 Km road has been blacktopped (कालोपत्रे) among total 1,792.42 Km in 12 years. There are total 149 bridges planned but only 58 are under construction. Indian Contractors of different road segments have already left the sites. (L)